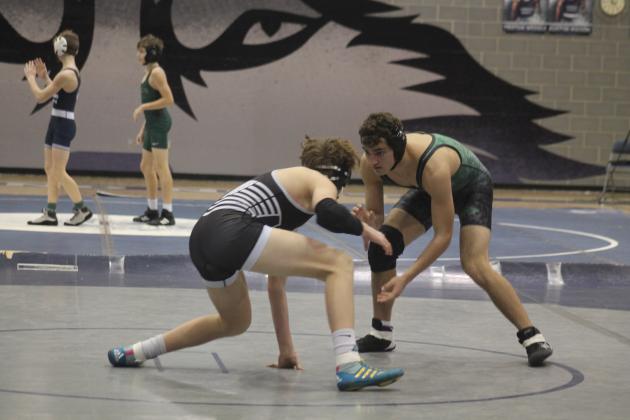 The team’s performance was so dominant, its only regret was being just shy of perfection.

The Edmond North wrestling team defeated Edmond Santa Fe 82-0 in a 3-Dog Night dual in the North gym Monday morning as it seeks to continue its Edlam dominance.

North (7-0) earned maximum points in every match but one as it cruised to a win in its first of two duals of the day.

North coach Andy Schneider said it is good to see his wrestlers compete to their ability despite being favored.

“Never take anyone for granted,” Schneider said. “Could have easily went out there and maybe taken them for granted, and they wrestled and could have flipped a few of those matches. I was proud of them for doing that.”

Ethan Ooten was the only Husky not to pin his opponent, but he nonetheless collected a major decision at 160 by defeating Will Shoemaker 11-0. He finished the bout strong by collecting 3 near fall points just as the buzzer sounded.

Schneider said Ooten is a hardnosed wrestler. Even though he didn’t pin his opponent, Schneider said he was proud of the way Ooten battled.

“We were wanting him obviously to get the fall so we could get all falls,” Schneider said. “He wanted to do it for his team, as well. He wanted that… The guys on the bench, they’re all cheering, they wanted him to get the fall as well. There was some extra motivation there from his teammates, which is cool. I like to see the guys pulling for each other on the bench.”