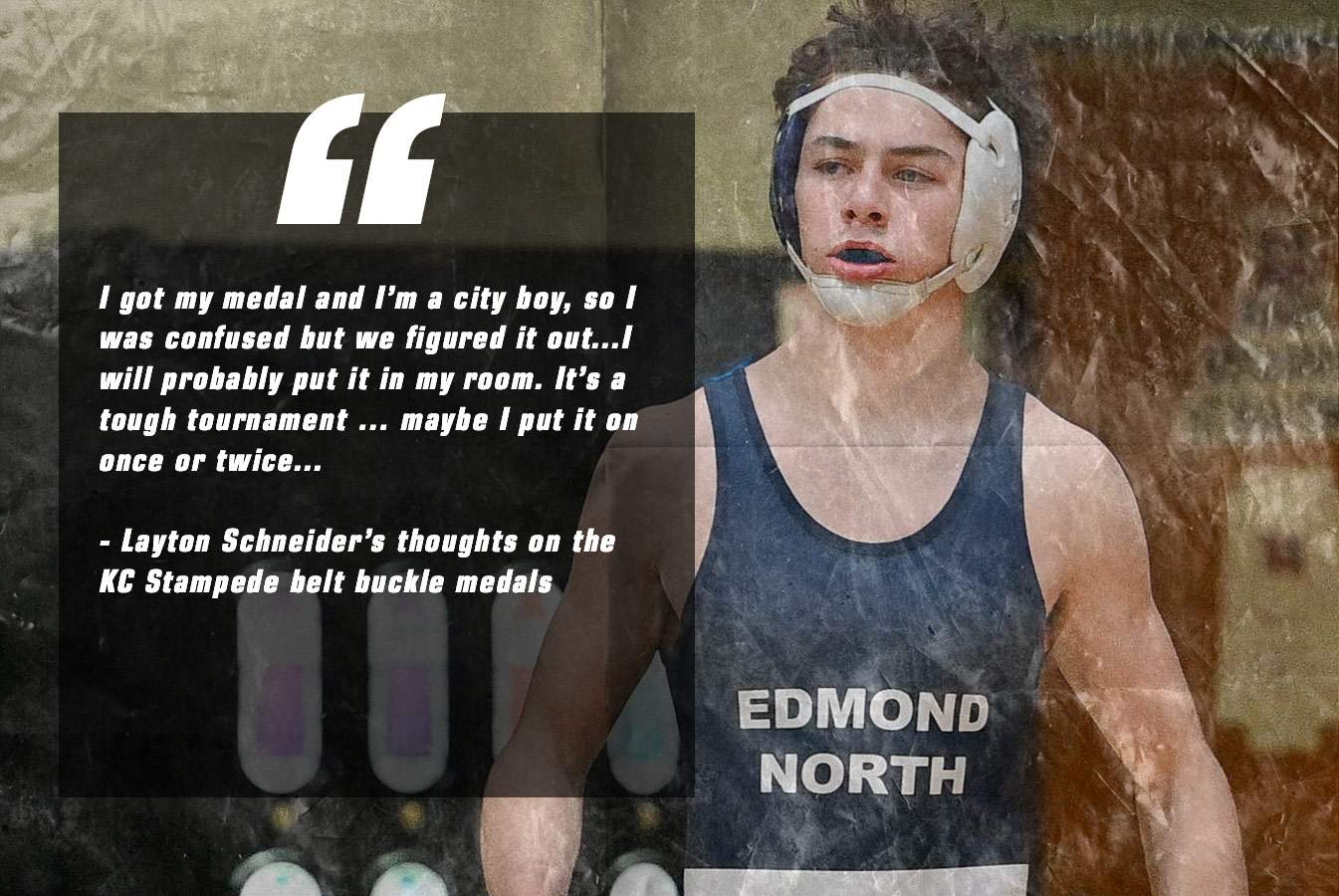 Layton Schneider’s first trip to the Kansas City Stampede ended with a runner-up finish and a little bit of a shock at the medal stand.

“I got my medal and I’m a city boy, so I was confused but we figured it out,” the Edmond North sophomore said while holding a belt buckle. “I will probably put it in my room. It’s a tough tournament … maybe I put it on once or twice. But this is a tough tournament.”

Schneider was one of four runners-up for the Huskies, which won the team title at the two-day with 200 ½ points – barely ahead of runner-up Stillwater and its 199 points.

The Huskies won the team title without a champion.

This marked the first time Edmond North won the competitive tournament and it came without a full lineup. Coach Andy Schneider noted four of his usual starters weren’t competing due to a combination of maladies: shoulder injury, flu, knee and ankle. Two of those gone were ranked: No. 5 Kody Routladge (132) and No. 3 Ricky Thomas (195).

“We came together as a team very well and put on a show for our fans,” Layton Schneider said.

His dad, Coach Schneider, noted Edmond North had been in this tournament with a team that eventually won the state championship but were only a top-four placing team in this field that is typically loaded. This year’s meet expanded from 40 to 64 and moved to a new location — Bartle Hall in downtown Kansas City.

Even with a roster loaded with sophomores, the big stage didn’t prove to be too much. The Huskies finished with eight medalists, one more than Stillwater.

“It is a great group of kids and we left some home,” Coach Schneider said. “What really sealed it was this morning (Saturday), we lost one match in the first full morning round in every bracket. That momentum … It is cool. You see it a lot in duals but it was cool to see them feed off that and the next one expected to win.”

Christian Belford was the first one up in the finals, finishing as the runner-up at 113, falling 5-4 to Zayne Reynolds of Staley (Mo.).

Ranked No. 2 at 113, Belford reached the finals by securing a 1-0 win over Ponca City’s Jimmy Swenson.

Layton Schneider lost the 145-pound title to Kal Miller of Park Hill (Mo.) by an 8-0 major decision. Miller, a Maryland commit and defending state champion in Missouri, built a 5-0 lead in the first period. In the semifinals, Schneider knocked off Millard South (Neb.) standout Joel Adams by a 5-2 decision. Adams was ranked No. 4 in the nation.

“I had a long talk with my dad (Friday night) and if my favorite or not, I will just wrestle,” Layton Schneider said. “In my quarterfinals, I got caught up trying to win. Coach (Boo) Lewellan helped me really good before the match and took my mind off the match and said ‘you are here to wrestle, let’s go do that.’”

Schneider said he had no nerves before the showdown with Adams, a state champion in his home state and a two-time national champion at Fargo this past summer.

“Even before my semifinals, I told my friends in the stands and buddies. I know how good he is, but I told them I will go out and beat him,” said Schneider, who built a 4-0 lead in the first period with a takedown/near fall combo less than 30 seconds into the match.

That was the fifth win in a row for the tournament before falling to Miller, who was named the Most Outstanding Wrestler at the tournament.

Jaxon Randall and Antrell Taylor of Millard South provided a tough final at 170 pound as the two three-time medalists and state championships battled until the end. Taylor, a Nebraska commit, picked up a 6-5 win as he got a takedown with 55 seconds left to seal the win for the two-time Nebraska high school state champion.

Randall, the defending 170 pound champion and currently ranked No. 1 in the state at 170, posted a 5-0 mark prior to that. Four wins came by fall, the exception was a 9-4 win over Aidan Bowers of Christian Brothers College High School out of St. Louis in the semifinals.

Oscar Williams (182) was the fourth and final runner-up for the Huskies, losing in sudden overtime, 6-4, to Omaury Alvarez of The Baylor (Tenn.) School.

Williams, ranked No. 6 in Oklahoma, knocked off a three-time Missouri finalist and one-time champion in Chase Brock, of Whitfield, in the semifinals, 6-0.

Garrett McBride (106) placed fourth, Hunter Hollingsworth (120) and Talon McCollum (160) were fifth for the Huskies and Jude Randall (138) took sixth. Jude Randall, No. 4 at 138 in the state rankings, beat the tournament’s third-seed, Gavin Linsman of Whitfield, in the consolation portion of the event.

McBride lost to Jacob Bond of The Baylor School in the quarterfinals and then again in the third-place match. Bond, a freshman, was ranked as high as No. 4 in the country as of last month. McCollum went 6-2 with a loss to in-state rival Drake Acklin of Collinsville, ranked No. 1 at 160 in the consolation bracket.

Hollingsworth, No. 2 in the state rankings at 120, beat Stillwater’s Sam Smith in the fifth-place match — a key match considering how close the two schools were in the standings.

That allowed the Huskies to take home the first-place trophy … errr …. cowbell.

“It is always fun to beat Stillwater when they are ranked higher than you,” Layton Schneider said. “It is the first time I came to this tournament and it’s fun. It is definitely one of the best ones I’ve been to.”