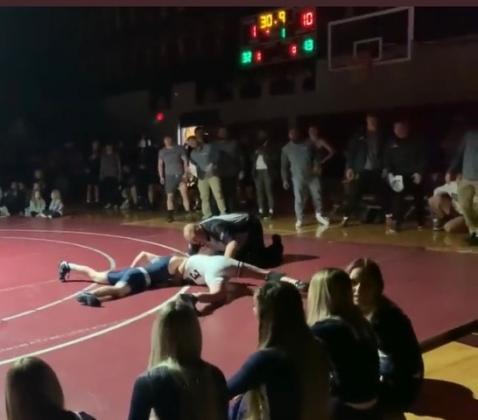 Jan. 11 served as the date for the annual Three Dog Night Wrestling Duals between North, Santa Fe and Memorial. The North junior high team cruised to two consecutive dual wins over the Wolves and Bulldogs to claim the junior high portion of the Edmond City Championship.

The high school teams of North and Memorial defeated Santa Fe 72-12 and 58-18 respectively.  That set-up a showdown between the Huskies and the Bulldogs as North was vying for its 21st straight city championship. The Huskies were without Geary Tournament champion Jaxon Randall and Geary placers Daxton DeFrange and Kody Routledge. This didn’t look to be a problem at first as they jumped out to a 23-2 lead.

North received a forfeit at the 120-pound weight class to open the dual, then sophomore Hunter Hollingsworth (126-lbs.) battled back from being down 6-0 to come back and win by decision over Jake McCain.

At 132-pounds, Brayden Belford (So.) of North won by decision over Mitchell Borynack to push the team score lead to 11-0.

Memorial got on the board at 138 pounds when senior Matt Garcia won by decision over North’s Kanon Futrell (Jr.).  The Huskies responded with a first period pin by sophomore Layton Schneider (145 lbs.) against Jesse Wright.  Senior Jarrett Whitefield (152-lbs.) of North then accepted a forfeit to push the Husky lead to 23-2.

That’s when the momentum took a huge swing in the favor of the Bulldogs.  Michael McCracken (160-lbs.) began the comeback for Memorial with a 7-1 decision over Isaac Villalobos (Jr.).  Following it up, a wild back and forth match between North’s Jordi Castillo (So.-170 lbs.) and Memorial’s Liam Daniels took center stage.  Just when it seemed like Castillo was going to put away the match with a takedown, Daniels caught him on his back and secured the pin in the last fifteen seconds of the match.  Senior Bulldog, Ben Mower kept things rolling with a first period fall over James Hayes (Sr.,182-lbs.).

This set-up the feature match of the night between Memorial’s AJ Heeg and North’s sophomore Oscar Williams (195-lbs.).  Williams had given Heeg his first loss of the season last weekend in the quarterfinals of the Geary Tournament.  Williams went on to win that tournament while Heeg came back and took second.  Two first-period takedowns proved to be the difference Tuesday night as Heeg avenged the loss to Williams and hung on for a 5-4 win.

Memorial finally pushed ahead in the team score after wins by fall in the 220 and heavyweight bouts by senior Eli Cordy and junior Carsten Mower.  With Memorial ahead 32-23, the Huskies would need bonus point victories in the final two bouts to avoid the upset.

Freshmen, Jake Goodin (106-lbs.) for North posted a major decision win over Wes Madden to score four crucial team points and narrow the team score to 32-26.  This meant that North senior Garrett McBride would have to win by fall for the Huskies to win the dual.

McBride (113-lbs.) jumped out to a big lead over Blake Sanford and was actually in danger of winning by technical fall instead of pin.  A technical fall would have only resulted in five team points instead of six and would have ended the dual in a tie. A tie meant Memorial would have won the overall dual on criteria.  However, one final press on Sanford’s shoulders and the referee slapped the mat, signifying a pin and pushed the Huskies ahead in the final team score 33-32.

“We’ve had a few close ones over the years, but I can’t remember any like this,” Andy Schneider, Edmond North head wrestling coach said. “He (McBride) took the whole team on his shoulders, accepted the pressure situation, and got the job done. I’m super proud of his performance.”