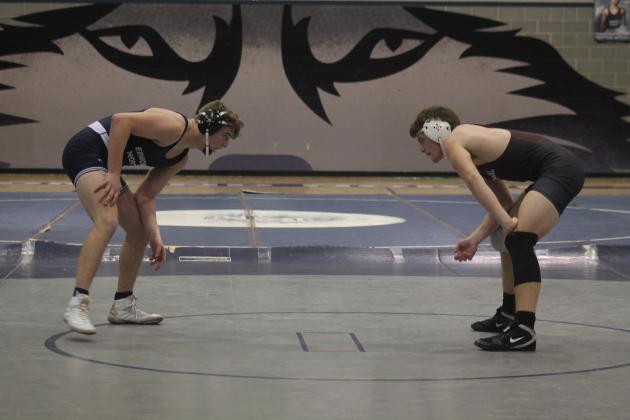 Bowman held on for an overtime victory in the tightest and most emotional bout of 3-Dog Night as he helped the Edmond North wrestling team defeat Edmond Memorial 59-7 and claim its 20th-consecutive city championship.

No. 3 North (8-0) dominated its second dual of the day after previously blanking Edmond Santa Fe.

No. 9 Memorial (4-7) defeated Santa Fe at home Thursday but struggled on the road against the Huskies.

The Huskies started eight freshmen, a sign their Edlam dominance may not be going anywhere anytime soon.

“Our little league coach, (former Oklahoma State wrestler) Coach Hardell Moore, coached a lot of these guys in little league,” Schneider said. “In junior high, they were coached by Larry Tettleton, our amazing junior high coach who’s in the national wrestling hall of fame, so a lot of credit goes to him (for) getting these guys to compete their 9th-grade year at the high school level.”

At 182, Bowman and Memorial’s Cole Carroll competed in the most entertaining match of the day. Neither was able to take down his opponent, and the bout ultimately went to sudden victory tied at 3.

After neither wrestler scored, the bout transitioned to overtime. In the first period, Bowman scored an escape to take a 4-3 lead. In the second half of overtime, Bowman managed to ride out Carroll the full 30 seconds and take the win.

Both benches and fan bases made plenty of noise and tried to will their wrestler to victory despite the dual already being out of hand with North leading 35-7.

The ending came somewhat controversially as the referee blew his whistle to end the bout with 0.4 seconds remaining on the scoreboard clock. Memorial coach Will Delk said the referee told him he kept the final seconds in his head and the clock operator must not have started the clock on time.

The dual began at 113. North’s Aiden Godbehere accepted a Memorial forfeit at the weight. The Bulldogs also forfeited at 220 and 106, with Gabe Mullaney and Christian Belford accepting the wins.

Four Huskies, Hunter Hollingsworth at 120, Layton Schneider at 138, Ethan Ooten at 160 and Teagen LeBlanc at 285, pinned their opponents. Jude Randall earned a technical fall at 132, 18-2.