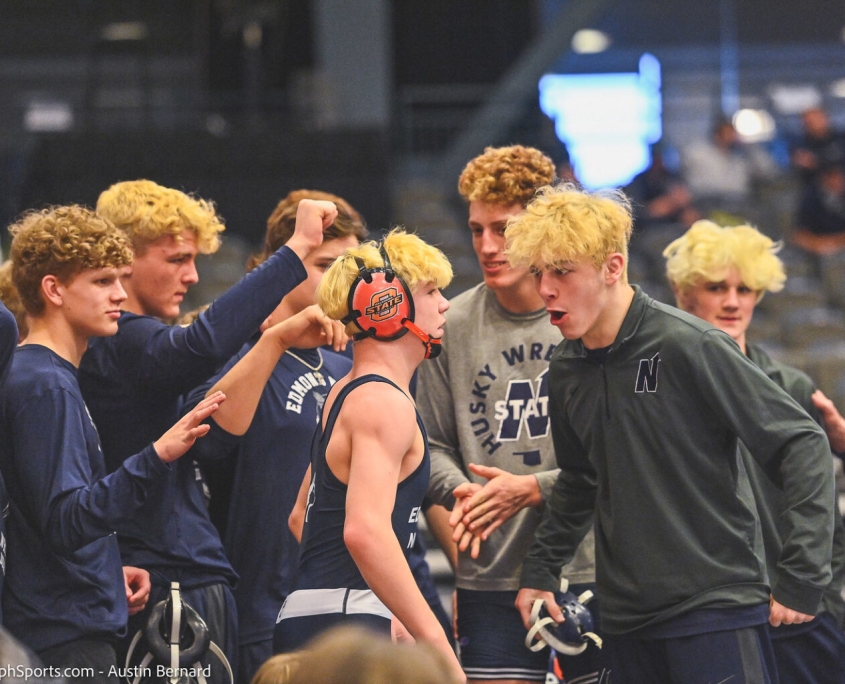 I wrote this weekend about our hopes to preview as many teams in the state as we possibly can this season. Our first one is here and we’re taking a look at one of the best young teams in 6A with Edmond North.

Team Outlook:
Last season the Huskies broke records for most freshmen state qualifiers in state tournament history from the same team (9), and most freshmen state medalists from the same team in tournament history (6). Finished 3rd as a team in the state tournament. Capped off a 14-1 dual season that saw them defeat Mustang during the regular season, but then suffer defeat to Mustang in the dual state semifinals. Mustang went on to win the dual state title for the first time in school history.

The next weekend (Dec 17-18) will follow with the Kansas City Stampede in Kansas City, MO. Year-in and year-out this tournament is ranked among the top high school tournaments in the nation. This year the Stampede will expand from 40 teams to 64 total teams.

After the Christmas break, the Huskies will attend the oldest high school tournament in the nation (since 1945) hosted by Geary High School in Geary, OK. (Jan. 7-8) The blind-draw format always creates exciting first-round match-ups.

The following weekend (Jan 14-15) will be the annual Central Oklahoma Athletic Conference (COAC) Tournament. The Huskies are the defending COAC Champions. Last season, the COAC dominated the state tournament with the top three state teams (Stillwater, Mustang, Ed. North) coming from this conference. The Dual-State champions (Mustang) were also from the COAC. Individually, 20 of the 28 state finalists were from the COAC, including 11 of the 14 State Champions. The COAC had a total of 34 state medalists. The COAC also featured the high school coach of the year, (Picklo-Mustang), assistant coach of the year (James-Ed North), and junior high coach of the year (Tettleton-Ed North). The Huskies close out their tournament season at the Jay Hancock Tournament in Yukon, Oklahoma. (Jan. 21-22)

The dual season will feature some traditional rivalries and a new one.

Head HS Coach Andy Schneider: 23rd year with Edmond North. Beginning 13th year as the head coach. Began coaching in Romeo, MI for 2 years, then moved to Oklahoma and coached the Edmond Generals for 2 years prior to Hardell Moore taking over the program. Last season Schneider was named the COAC Coach of the Year and the Region 8 Coach of the Year. He is also a member of the OKUSA National Team staff. Career record as Edmond North Head Coach: (132-21)
HS Asst: David James: beginning 5th year with the Huskies. Storied career as Head Coach of UCO. Brings an immeasurable amount of wisdom and experience to the program. Two big accomplishments for James last season included being named the HS Assistant Coach of the Year and getting to coach his first….and second High School State Champions; Jaxon Randall and Braden Bowman.
HS Asst: Mike Arnold: beginning his 3rd year at North. Was a 3x HS state champion and also a Jr College All-American and NAIA runner-up. Has coached at the youth, high school, and college levels. Is a retired Homeland Security officer.
JH Head Coach: Larry Tettleton: Beginning 28th year with Edmond North. Is also a member of the National Wrestling Hall of Fame. Last season he led the program to their 4th Edmond Junior High Tournament title and broke the record for most points scored in the tournament dating back to 1942. Tettleton was named the 2020-21 Oklahoma Jr High Coach of the year for all sports. Also coaches football and baseball.
JH Asst: Evan Chada: Beginning 4th year with the program. Edmond graduate who wrestled for Memorial high school.
JH Asst: Kyle Garcia: Joins the JH staff this season. Kyle was a 4x HS state champion at Del City and Choctaw High Schools. Wrestled collegiately for both the Sooners and Cowboys.
Freestyle/Club Coach: Boo Lewellan: joined the staff last spring working with the freestyle program. Will continue to work with individuals on the team during the winter season. Was a 3x HS state champion for Yukon and a 3x All-American for OSU

Thank you to Coach Andy Schneider for the assistance on this. If anyone wants to get their school featured here, please send me your information and we’ll put it together.