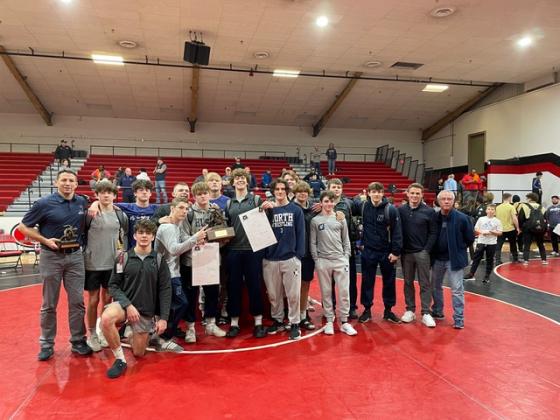 GEARY, OK -The Edmond North wrestling team traveled to Geary, Oklahoma for the 77th edition of the nation’s oldest wrestling tournament, the Geary Invitational.  This year’s field of teams included the top six ranked teams in 6A along with the number one ranked and defending state champion teams from 5A (Collinsville), 4A (Tuttle) and 3A (Marlow).  There were also a host of out-of-state teams from Texas, Missouri and New Mexico.

On Saturday night, the tournament director announced the team scores and the Edmond North Huskies were crowned the 2022 Geary Tournament Team Champions.

The tournament always begins with excitement due to the blind-draw format.  This means that some of the most competitive matches of the tournament are wrestled in the very first round rather than later in the tournament.

Freshman, Jake Goodin (106 lbs.) drew the number one ranked wrestler in 5A right off the bat and suffered a tough loss, but then he showed the poise of an upperclassman as he battled back and won five straight matches to finish in third place.

At 113 lbs., Christian Belford (So.) placed fourth overall before suffering a loss in the semifinals.  He bounced back to fourth place.

Hunter Hollingsworth went unscathed through the tournament and captured gold in the 120 lbs. weight-class.

Brayden Belford (So.-126 lbs.) was finally back from injury and competed in his first tournament of the season.  After a tough quarter-final loss, he won three consecutive bonus-point matches and finished fourth overall.

Freshmen, Kody Routledge (138 lbs.) was in arguably the toughest bracket of the tournament. He opened the tournament with a hard-fought 5-4 decision over state-medalist Matt Garcia of Edmond Memorial. He followed that up with a quarterfinal win and then another key victory in the semis over state medalist Jace Roller of Bixby. In the finals he met up with returning state champion, Cole Brooks of Collinsville. Kody had defeated Brooks earlier this season but this time dropped a tough 5-3 decision. Brooks ended up being named the tournament OW (outstanding wrestler) .
Another unique quality to the Geary Tournament is that there are challenges for second place after the finals matches. Routledge was challenged by state-medalist Shawn Muse of Choctaw. A late third-period takedown secured the win for Routledge and allowed him to keep his second place finish.

At 145 pounds, Layton Schneider (So.) met up with senior, Reece Davis of Tuttle in the second round of the tournament. Schneider dropped a hard fought 10-7 match to Davis who went on to win the tournament. Schneider entered the consolation bracket where he went on to win five matches in a row on Saturday to come back and take second place. He won all five matches with bonus points (3 pins, 1 technical fall and 1 major decision) which played a huge role in the team score.
Talon McCollom (So.-152 lbs.) pushed himself into the finals with a hard-fought 3-0 win over senior, Noah Smith of Union. McCollom dropped his finals match and then lost to 3-time state champion Cam Steed of Collinsville in the challenge match to finish in third place.
At 160 pounds, Daxton DeFrange (Sr.) advanced to the semifinals before his first loss. In a key consolation-semifinal match, DeFrange beat state medalist Jacob Snyder of Bixby to move into the conso-finals. DeFrange finished fourth.
Senior, Jaxon Randall strung together four straight wins to capture the 170-pound championship. His victories included two major decisions and a technical fall win.
Oscar Williams (So.) had arguably the biggest win of the tournament in the second round when he defeated AJ Heeg of Edmond Memorial. Heeg is ranked #1 in the state, #9 in the nation, and recently signed to wrestle for the University of Oklahoma. Williams went on to win his next two matches in decisive fashion and claim the 182-pound championship.
This is just the second time in school history that the Huskies have won the prestigious Geary Tournament, the last win coming in 2014.