North Wrestling Ends with a 14-1 Record

You are here: Home1 / Uncategorized2 / North Wrestling Ends with a 14-1 Record 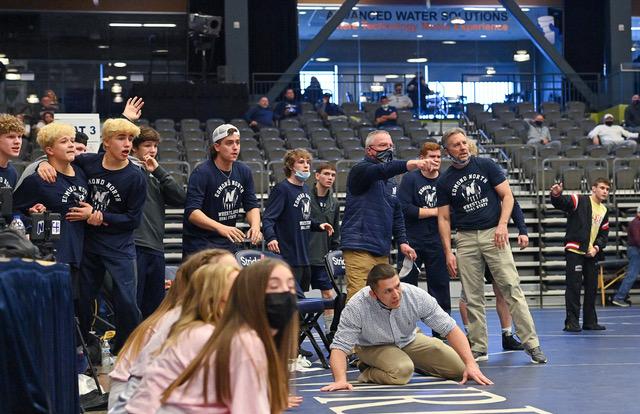 ENID − Edmond North Wrestling brought a 13-0 record into the Dual State Championship, Saturday, March 13th at the Enid Stride Bank Arena.  The quarterfinal round saw the Huskies blank Union 78-0 to move onto a battle against the state tournament runner-up, Mustang Broncos in the semi-finals.

The Huskies jumped out to an early 3-0 lead behind a hard-fought victory from freshman, Hunter Hollingsworth. Mustang responded with a technical fall victory from senior, Tucker Owens. North jumped back in the lead 15-5 behind a trio of victories from freshman Brayden Lucas, Jude Randall and Layton Schneider. The Broncos then won the next three weight classes to reclaim the lead 17-15.

However, Mustang’s trio of state champion upper weights scored three falls to put the team score out of reach 35-21. North freshman, Christian Belford closed out the dual with a win to make the final score 35-24 in favor of the Broncos. Mustang went on to win in the Dual State finals 45-21 over Bixby.

The Huskies finish the season with an impressive 14-1 overall record.

“Out of 14 weight classes, we ended up with seven wins, but Mustang was able to score more bonus points in their wins. We knew it would come down to those crucial extra points,” Edmond North head wrestling coach Andy Schneider said.

Mustang claimed bonus points in six of their seven wins. North’s only bonus point win came from Schneider, who was able to secure a third-period fall in his match.

Bowman had an impressive win in a rematch of the state finals where he had slipped by Reyes of Mustang 3-2. This time it wasn’t close as he posted a decisive 12-5 win in his final high school match.

“It was great to see Braden get that win. They had gone back and forth a few times this season and it was always close. I was glad to see him win convincingly today. We’re going to miss our seniors, but we’re also excited that we advanced to the Dual State semi-finals this year with nine freshmen in the lineup. The future is bright,” Schneider said.

Twins Wrestle to the Top
Scroll to top