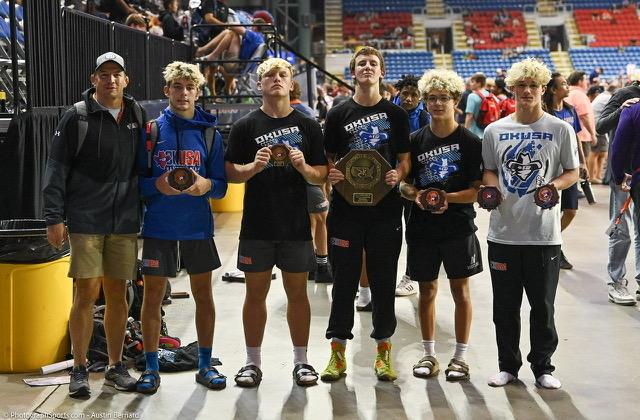 Oscar Williams was the champion in the 16-under division behind the strength of six straight wins.  He is the third national champion in Edmond North history.

Talon McCollom became the third double All-American in school history by placing in both the freestyle and Greco divisions of the tournament.  Rounding out the All-American finishes were Jude Randall, Ricky Thomas and Layton Schneider.

“What can I say about Oscar Williams, he might just love wrestling more than I do and I’m so happy for him and his national title. Talon McCollom has improved by leaps and bounds since the end of the regular season. He has risen to a whole new level and it showed this week,” said Edmond North head wrestling coach, Andy Schneider.

Team captain and defending Oklahoma state champion, Jaxon Randall competed in the 19-under division.  He complied ten wins in the freestyle and Greco divisions, but finished just shy of All-American status.  Other Huskies competing and picking up wins were Brayden Belford, Christian Belford and Aiden Godbehere.

“I’m so proud of the work these men put in to preparing for a tournament of this magnitude.  While enjoying summer break, they fit in two and sometimes three workouts a day. Oklahoma as a state had a total of nine All-Americans in the 16-under division and five of them are from Edmond North.  I’m lucky and blessed to be able to coach these guys,” said Schneider.

This summer marks the 50th anniversary of the USA Wrestling National Championships in Fargo, North Dakota.  Known as the world’s largest and toughest tournament in the world, brackets typically include over 100 wrestlers and placing at this tournament earns national recognition.  Wrestlers must qualify to attend.  Twenty-five wrestling mats cover the turf field of the Fargodome during this week-long completion.

Twins Wrestle to the Top